Cretan roses are tough. Blooming yellow, pink, crimson and fiery orange here in Alan’s garden, they do not lose a single petal when the meltemi wind howls in from the north. While I am here a Saharan sirocco whips their heads, a thunderstorm pelts them with hailstones and still, when I come out on the patio to drink my tea the next day, there are the roses, nodding in the morning.

They remind me of this island’s language. Bending, whipping, caressing, Cretan Greek is flexible, intense, and  full of colour. A single word’s meaning changes according to the pitch, tone and inflection with which it is delivered. Carol Poppinga, a trilingual jewellery artist who has training in both archeology and Greek, sits with me in her Myrthios workshop explaining a concept foreign to English.

An example is the word ‘tora.’ Spoken in a normal voice, it means ‘now.’ “Tora!” with force behind it means ‘immediately.’ “Tora?” as a question translates as “Are you sure?”or “couldn’t it wait?”  “To-o-o-ora,” the elongated ‘o’ sound half sung, pitch descending, sounds like the wind. Spoken with one hand raised and waving cylindrically, it means “too late.”

Beyond the roses in Alan’s garden, herbs grow around the spiky spines of a yucca tree. Here, and all over mountainsides that hum with bees in spring, you can smell sage, lavender, oregano and spicy savory.

Words too, in Cretan Greek, carry a punch that changes with the way they are are pronounced. The word ‘geros,’ if pronounced GEros, means old man. GerOS means strong. Then there is the word ‘malaka.’ MaLAka means asshole. MalaKA means soft. Imagine the fun you can have playing with this kind of language.

Down at the other end of his garden, Alan’s blooming geraniums, interspersed with a variety of flowers, each with its own distinct personality are a riot of colour against the mountains, sea and sky. 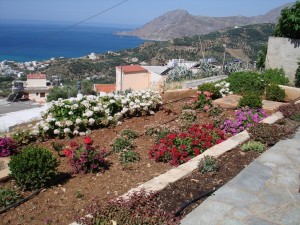 Carefully planned and beautifully cultivated, the garden does, however, have wild elements. Birds and the winds bring and sew surprises that cannot be denied. Stubborn papyrus, from which the Egyptians just across the sea made paper 4,000 years ago, has seeded itself in a concrete crack on the garden steps. Beside it a pretty snapdragon has taken root in the middle of the stairs.

The soil in Alan’s garden is predominantly clay, the same clay the Minoans used more than 3,000 years ago to make models of heads wearing all kinds of different expressions. (See them in the Heraklion Archeological Museum.)  They also used clay to archive the world’s first linear script on clay covered stones, at their Phaestos palace.

A peaceful, stunningly creative society, the Minoans traded with the Egyptians to the south and with the ancient Mesopotamians (Greek word) to the east until volcanoes and earthquakes twice destroyed everything they had built here. After that came the invasions, one after another after another, many of them followed by brutal occupations.

Mountain villages on this part of the south coast nestle under rock cliffs and outcroppings, the stone dwellings built one against the next hundreds of years ago. If invaders came into the bays below, the inhabitants could escape unseen, through the network of their houses into the mountains behind.

Invaders’ legacies still exist in the Greek myths set on Crete, in the Roman baths being excavated in the mountains, in graceful  Venetian arches, in cenotaphs to Cretans who resisted the Turks and the Nazis. And in Greek words that have migrated into all the Western cultures: psychology, archeology, apology — and so many other –ologies!

Alan’s garden: a symbol of the tough, flexible, colourful and resistant Cretan beauty from which it all began.